For the first time, the Center for Countering Digital Hate comprehensively details how Google enables Big Oil’s greenwashing. We reveal that nearly half of the $23.7 million spent on Google search ads by oil and gas companies in the last two years have targeted search terms on environmental sustainability. The five companies studied in this report, ExxonMobil, British Petroleum (BP), Chevron, Shell, and Aramco, have polluted our search results while Google raked in their dirty money.

Introduction from our CEO

As I write, an energy crisis is hurting households around the world and contributing to crippling inflation. Meanwhile, Big Oil is enjoying record profits by jacking up their prices and margins. This shameless act of profiteering took place despite the scrutiny they are deservedly under. The mass burning of hydrocarbons by humanity has led to rapid shifts in the composition of our atmosphere and ecosystems. Unprecedented global action is being demanded by people, scientists and politicians. The clamor for greening our economies is an existential crisis for those companies and we know from experience they will do anything and everything to stave off the moment when humanity makes the investments, policy changes and decisions to cut off the flow of hydrocarbons from Big Oil companies and the torrent of money that flows back to them.

An entire industry of enablers has helped Big Oil profiteer and deny, deflect and delay the moment that meaningful change happens. The UN Secretary General, António Guterres, criticized PR agencies “raking in billions” for gaslighting the world about Big Oil’s detrimental impact on the climate. But among those enablers, CCDH has discovered that social media firms are the newest weapon of choice. And chief among them is Google, a firm that has made its reputation by providing a curated lens on the world, providing useful results for every query we put to its search engine, but has since sold the right to distort that lens to Big Oil. This may come as a surprise. Google, after all, has touted its  “commitment to sustainability”. But that appears to be as hollow as their oft-repeated mantra “do no evil”.

In this report, for the first time, the Center for Countering Digital Hate comprehensively details how Google enables Big Oil’s greenwashing. Greenwashing is an advertising and public relations strategy companies use to appear more climate-friendly than they are in reality. When oil and gas companies greenwash, they seek to distract and deceive the public about their role in the climate crisis, particularly when their business models and activities are undeniably key drivers of climate change.

Client Earth defines ‘Greenwashing’ is where a company uses advertising and public messaging to appear more climate-friendly and environmentally sustainable than it really is. It’s also a technique used by certain companies to distract consumers from the fact that their business model and activities actually do a lot of environmental harm and damage.

In the case of our research, Big Oil used advertising on Google Search buying search terms like ‘eco-friendly’ to put forward messaging to try and appear more climate-friendly end environmentally sustainable than their business actually was.

Using the data analytics tool Semrush, we reveal that 40% of the $27.3 million spent on Google search ads by oil and gas companies in the last two years have targeted search terms on environmental sustainability. The five companies studied in this report, ExxonMobil, British Petroleum (BP), Chevron, Shell, and Aramco, have polluted our search results while Google raked in their dirty money.

Big Oil’s deception is by design. It is a tried and true business plan for the world’s largest polluters to make public promises about sustainability, whilst lining their pockets with the largest profits in decades. In September 2022, the House Committee on Oversight and Reform’s Subcommittee on the Environment released initial findings of their investigation into Big Oil’s latest deceptive PR tactics. The Committee found that Big Oil, in their own words admitted through internal documents, is “gaslighting” the public.

Our report has discovered much of the same: their ads are not supported by their actions. The internal memos obtained by the Oversight Committee underscore just how intentionally misleading Big Oil designs their ads to be. Ads placed by Shell promote a commitment to “net-zero emissions”, while the company privately instructs employees that net-zero is “not a Shell business plan”. Ads placed by BP claim “carbon capture… can cut CO2 emissions”, while the company privately plans to use carbon capture to “enable the full use of fossil fuels across the energy transition and beyond”. By allowing fossil fuel giants to advertise on searches like “How to reduce greenhouse gas emissions?”, “eco-friendly companies”, and “net zero”, Google is not only complicit in the latest disinformation campaign of the fossil fuel industry, but actively profiting from this deception.

This report proves what many of us know to be true: when fossil fuel companies come under fire for their role in exacerbating the climate crisis, they ramp up spending on ads that greenwash their environmental credentials. Greenwashing is key to Big Oil’s strategy to delay the transition to renewable energy. Climate campaigners and consumer protection advocates alike have long warned that greenwashing is the latest PR frontier for companies that refuse to reconcile their reputations and their actions on the climate emergency we face.  When users query the “pros and cons of the paris climate agreement” or “what are greenhouse gases”, Google sells ads to the US’s largest oil company, ExxonMobil, at the top of the page. We know that 68% of users are unable to spot the difference between ads and organic search results. Moreover, studies show that only 0.63% of Google searchers will click on links shown in the second page of results. Google is allowing fossil fuel companies to dominate the information ecosystem to peddle their deception.

Google’s lack of transparency and corporate irresponsibility is a wider problem – they sell search terms to the highest bidder, no matter the consequences. They don’t even act on their own specific promises. For example, contrary to its promises to no longer run ads containing climate denial, we reveal that Google continues to accept hundreds of thousands for outright climate denial. Ads that claim “fossil fuels make the planet safer” have no right to appear on a search engine that claims to care about the climate crisis.

Google has therefore exploited the lack of compulsory transparency from regulators and governments, allowing the company to operate with opacity and without an ad library for the public and researchers to know where ads are placed. The choice for Google is clear: keep your promises to stop profiting from climate denial and stop pushing Big Oil ads designed to distort their environmental records. The public, regulators, and officials should not be kept in the dark about Google’s role in greenwashing the records of fossil fuel giants. Following the principles laid out in CCDH’s framework for tech reform and legislative change, the STAR Framework, we demand the following:

It’s time for Google to come clean about its own gaslighting. The planet can’t wait for corporations to decide to act responsibly.

Nearly half of the $23.7 million spent on Google search ads by oil and gas companies in the last two years have targeted search terms on environmental sustainability like -  “How to reduce greenhouse gas emissions?”, “eco-friendly companies”, and “net zero”.

Google must stop helping Big Oil greenwash their role in the climate crisis, and #BreakUpWithBigOil now. 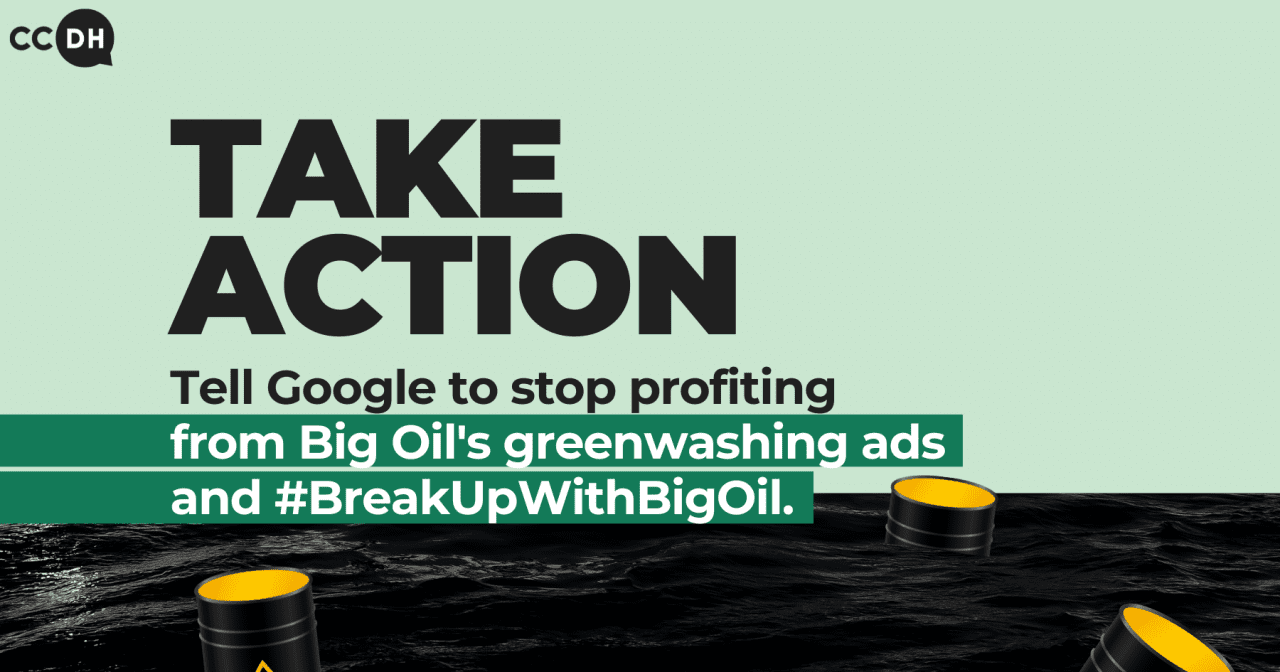