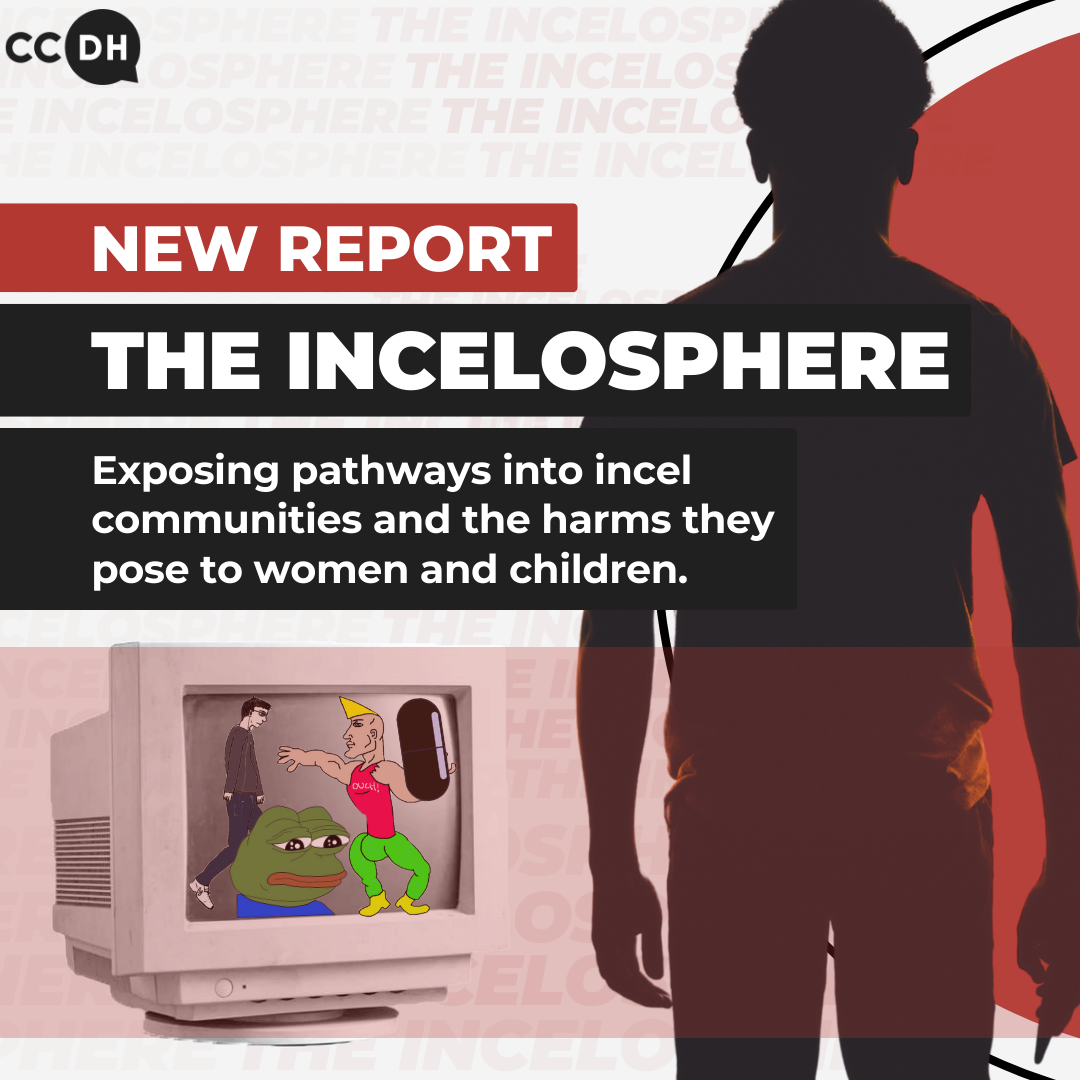 CCDH’s new report evidences the dangers incel sites pose to our communities - especially to women and children. The four leading forums we analyzed were filled with extreme hatred of women, racism, glorification of violence, and discussion of pedophilia.

Poorly-moderated social media gives bad actors a platform to drag others into a rabbit hole of despair - which often can end in deadly real-world consequences.

CCDH exposes the most influential and largest incel forum (which we call the ‘Incel Forum’).

This new in-depth study by the CCDH’s Quant Lab shows a 59% increase in mentions of mass attacks, widespread approval of sexual violence against women, with 9 in 10 posters supportive, and support for pedophilia, with the rules explicitly changing in March 2022 to permit the sexualization of ‘pubescent minors’.

The ‘Incel Forum’ receives an average of 2.6 million monthly visits, with 17,000 members. Discourse is driven by 406 ‘power-users’ who produce 74.6% of all posts on the forum, some spending upwards of 10 hours a day on the forum. In some cases, boys as young as 15 are being led down a rabbit hole of hatred and extremism.

We analyzed almost 1.2 million posts made over an 18-month period and found:

An Intro from our CEO Imran Ahmed

It has been eight years since incels violently burst into the public eye. Elliot Rodger, a 22-year-old man, murdered six people and injured fourteen more in Isla Vista, California, before killing himself. Before he died, he posted a long manifesto and several videos on YouTube detailing his hate-drenched worldview and membership of a nascent community of incels. Since then, dozens more have died at the hands of self-proclaimed incels around the world.

Across the world, law enforcement and intelligence organizations are aware of the growing issue of incel threats, considering it a priority. The Secret Service National Threat Assessment Center (NTAC) said in March 2022 that incels are a rising threat in the US. The UK Intelligence and Security Committee were warned by MI5 that incels are establishing synergistic relationships with other conspiratorial and violent movements.

This new report, a product of the Center for Countering Digital Hate’s new Quant Lab, is a systematic study of over a million posts over the past eighteen months on the world’s leading incels forum. By stripping language down to mathematics, we can eke out trends that provide real insight into incel communities. Our Quant Lab researchers studied an active community with thousands of members, some more active than others, that attracts a wider audience who make millions of visits a month. Analysis of their discourse shows this core group poses a clear and present danger to women, other young men, and reveals an emerging threat to our children.

We are in no doubt after conducting this study that this community of angry, belligerent and unapologetic men are dangerous to each other, with malignant social dynamics whereby they encourage each other to worse and worse extremes. Analysis of thread titles shows they are soaked in anger and despair. Only 5.8% of thread tags were positive. We found an over-time increase of 59% in violent rhetoric over the past year. We see a growing proliferation of content that encourages and excuses child sexual exploitation. In fact, in January 2022, the forum rules changed to permit sexualization of pubescent minors.

Here we can see, in real-time, the social norms of a community evolving, driven to new excesses. Unchecked, incel communities have the potential to radicalize further.

The organizers of the incel forum we studied – which we do not name – also set up forums for self-harm, body image anxiety and chronic unemployment. They know their market. They seek to grow their numbers. Children are welcomed onto the platform. We found self-identified minors discussing antisemitic conspiracies, a desire to perpetrate mass murders and even how to evade scrutiny by law enforcement.

CCDH has looked at other forms of hate before, for example, anti-LGBTQ+ hate in our most recent report, at antisemitism and anti-Muslim hate. It is dangerous to elide being a bigot to being a violent extremist. To do so cheapens the seriousness with which we take violent extremism and its cost in lives. However, there should be no doubt that the widespread proliferation of malignant content and ideas online create an enabling environment for more dangerous views to fester and grow. This is accelerated by social media in particular. Their platforms often serve to amplify harmful content – which reacts to high positive and negative engagement by pushing content into more people’s timelines – and can lead to normalization of these ideas through frequency bias.

We find in this study a reflexive dynamic between misogynistic communities online and incels. They argue with each other, support each other, share ideas, and promote each other’s lexicon and values. In short, they are brothers-in-arms in a war against women. That’s why a small subculture, numbering in the thousands, has had such an enormous effect. They have mastered the amplification machine of unregulated, poorly-moderated social media, using trolling-for-engagement tactics, the rapid anonymous dissemination of memes, and clickbait to draw people into other forums. We found a particular problem on YouTube, in our experience a platform that has been particularly poor at enforcing community standards and is slow to respond to reports of problems there. SlutHate Creep, one of the popular channels on the forum we studied, is designed to denigrate covertly filmed women. It should never have lasted so long.

Incels are dangerous to themselves and to others. They are a highly-developed example of the kinds of modern digital communities, based on malignant ideologies, pseudoscience, misinformation and hate that proliferate and are enabled by unregulated online businesses to cause our societies serious harm. The Secret Service NTAC report ended by warning “although every act of targeted violence may not be prevented, the risk of future tragedies can be reduced if the appropriate systems are in place to identify the warning signs, gather information to assess the risk of violence, and apply the appropriate community resources.” We agree wholeheartedly and hope our findings, and our recommendations for policy-makers and platforms at the end of the report are helpful to that end.

We call on YouTube, Twitter, Google and Cloudfare to stop enabling the growth of violent incel communities.