Facebook is failing to label 91% of posts containing Russian propaganda about Ukraine with warnings that the content originates with media outlets owned by the Russian state. 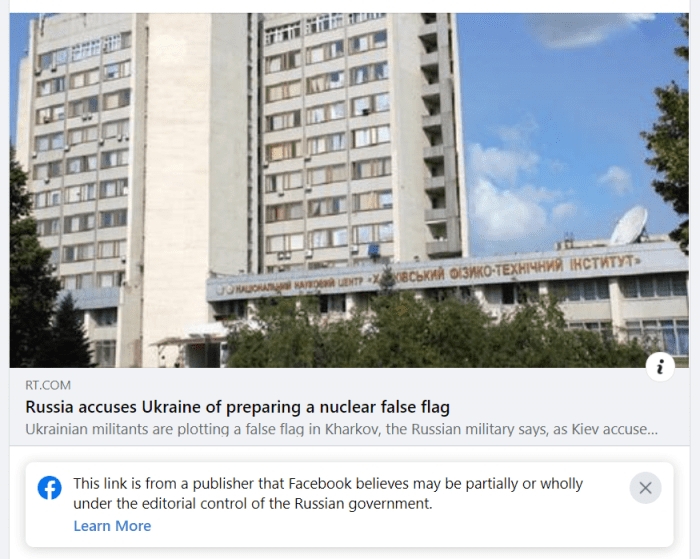 Articles about Ukraine written by English-language media outlets owned by the Russian state have received over 500,000 likes, comments and shares from Facebook users in the last year according to the social analytics tool NewsWhip.

The sample of 3,593 articles includes content posted by RT.com (formerly Russia Today), Sputnik News, TASS and Ruptly, a social media content producer owned by RT.com. All of these outlets have been identified by the US State Department as “Kremlin-funded media” and part of “Russia’s disinformation and propaganda ecosystem”.

Researchers then used Facebook’s own CrowdTangle tool to identify posts featuring the 100 most popular articles from this sample, to examine whether the platform applied warning labels stating that the content was from “Russia state-controlled media”.

This revealed that 91% of 1,304 posts containing articles from Kremlin-funded media did not carry any warning labels. While Facebook does label most Facebook Pages controlled by the Russian state and their posts, it was failing to label any posts from TASS before 26 February, despite the outlet stating it is “the leading Russian state information agency” in its Facebook Page description.

Examples of articles that Facebook is failing to label in posts include claims that:

The most popular article in the sample amplified comments from the Croatian President, Zoran Milanovic, that “blamed the US for escalating the [Ukraine] crisis”, receiving 9,416 likes, shares and comments in total.

Facebook announced in October 2019 that it would start “labelling state-controlled media on their Page and in our Ad Library” as part of its measures to counter disinformation targeting US elections. However, this new research shows that the vast majority of posts containing content from Russian state media, which are from a wider range of Pages and Groups, are not covered by this policy and do not carry labels.

Facebook whistleblower Frances Haugen has warned that the platform’s secrecy and lack of transparency will prevent the identification of “influence operations” run by countries like Russia, China and Iran.

“Facebook have once again come short on their promises to enforce their own rules. The justification for the Russian war against Ukraine was built on Facebook.”

“The Russian state is involved in an array of hostile influence operations. The tentacles of their integrated media production and social media distribution networks seek to change the way Western audiences think about climate change, vaccines, domestic politics and geopolitics to benefit Putin’s agenda, with clear implications for our national security and international order.

“It is time Mark Zuckerberg stops allowing his platform to be used by hostile actors with malignant intentions. His platform was found partly responsible for hosting the propaganda that led to the genocide in Myanmar. Today, his failure to stop his platform being weaponized by the Russian state is being felt by the people of Ukraine and, given the bellicose words of the Russian leader, cast the specter of a nuclear mushroom cloud over the Western world.”