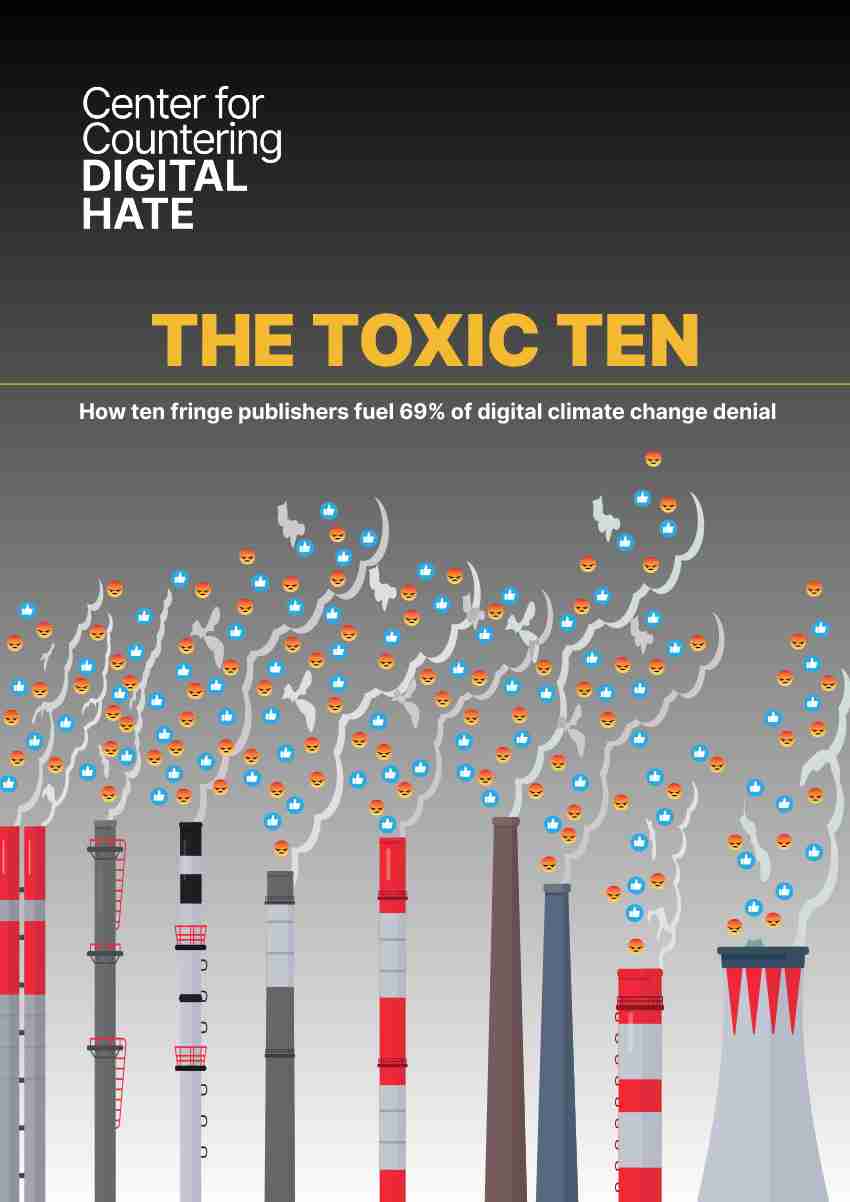 The science is undeniable - human activity is warming our planet at an ever-accelerating rate and leading to catastrophic climate change.
Yet, ten publishers - The Toxic Ten - are spreading baseless, unscientific climate denial on their own websites and across social media. They are responsible for 69% of all interactions with climate denial content on Facebook. It's a climate denial propaganda machine funded in part by Google via ad revenue, and spread across the world via social media, in particular Facebook, who allow them to pay to promote their denial. We are calling on Facebook and Google to stop promoting and funding climate denial, start labelling it as misinformation, and stop giving the advantages of their enormous platforms to lies and misinformation.

We are at a climate tipping point. Delayed action means humanity will be forced to endure continual and worsening surges in heat waves, droughts, typhoons and hurricanes, rising sea levels, and the degradation of our food supply.

It is the greatest crisis ever faced by our species. Through collective will, we can mitigate and avert the worst impacts of climate change. But, just as we’ve experienced recently with vaccine and COVID-19 disinformation, we continue to be up against vested interests with financial stakes, such as companies and autocrats dependent on hydrocarbon income, being aided and abetted by greedy platforms. Climate denial, like vaccine denial, obfuscates the truth by overwhelming us with claims and questions designed in bad faith to confuse the debate so action is delayed. The most potent tool of these self-serving parties is social media, a public forum where the most extreme, conspiratorial, and damaging content is rewarded with amplification.

It didn’t take the revelations of Facebook whistleblower Frances Haugen to show that the privileged and powerful executives of companies like Facebook and Google do not care about the majority of people, but rather their own pocketbooks. There may be rules, but the rules are just for show; no one is enforcing them. And the failure to enforce is not due to lack of resources; these are among the richest companies and the most powerful people there have ever been in the world. The failure to enforce is a calculated and deeply cynical decision, made at the top, and made to maximize profits. Social media companies even profit from the contrived “debate” over misinformation and denial because where else does it take place but on their platforms.

The Toxic Ten websites identified in our study are the main producers of content that sows climate change skepticism on social media platforms, creating the sense that there is a more extensive debate than there really is. They spread baseless, unscientific climate denial on their own websites but the real objective is to harness the power of social media platforms to spread this skepticism to the public and prevent consensus on facts and solutions – even though our lives depend on both.

The Toxic Ten, we calculate, are responsible for up to 69% of Facebook users’ interactions with this climate denial content. Despite Facebook’s promises in March 2021 to begin labelling posts featuring climate denial with links to correct information, the platform has failed to follow through. Just 8% of the most popular posts on Facebook containing the Toxic Ten’s misinformation carried labels.

The majority of the Toxic Ten are funded by Google Ad revenue, too. Together, the 10 generated up to $5.3 million in Google Ads revenue in just six months. The Toxic Ten are part of an efficient climate denial disinformation industry, reaching 186 million followers on mainstream social media platforms.

Many have links to oil and gas companies. Two publications have links to the Russian state. As the world waits to see if international leaders gathering at COP26 will urgently address the climate crisis, social media companies with a profound global influence carry the exact same responsibility to act on the Toxic Ten.

We are calling on Facebook and Google to stop promoting and funding climate denial, start labeling it as misinformation, and stop giving the advantages of their enormous platform to lies and misinformation. As long as Facebook and Google carry on doing business with climate deniers, they cannot claim to be ‘green.’ They owe it to us and the planet we all share, to deliver.

Stop cashing in on The Toxic Ten.

We are calling on Facebook and Google to stop promoting and funding climate denial, start labelling it as misinformation, and stop giving the advantages of their enormous platforms to lies and misinformation.