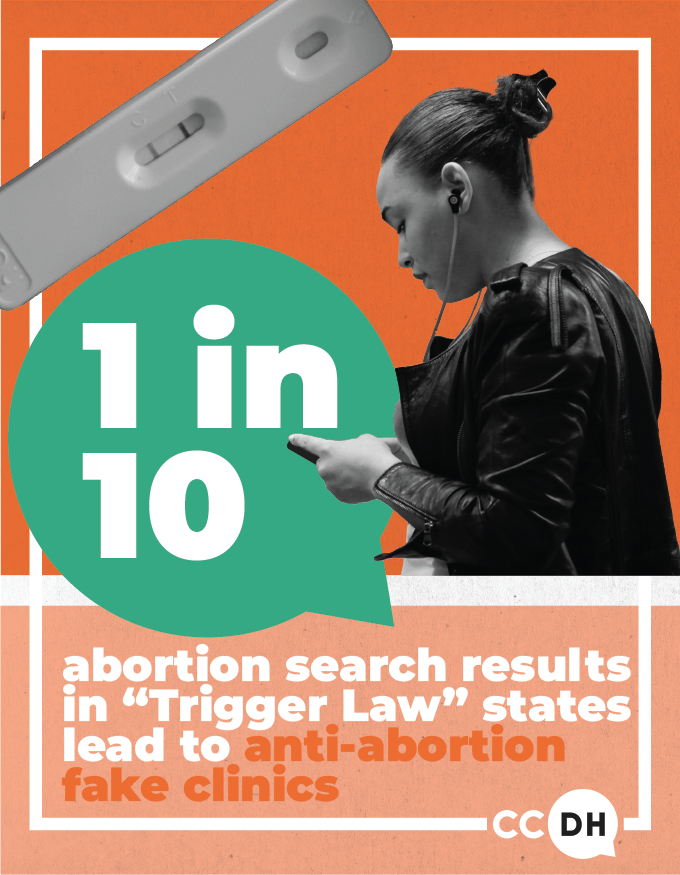 Our latest research has found 1 in 10 Google search results for abortion services in ‘Trigger Law’ states lead users to anti-abortion ‘fake clinics’. These ‘fake clinics’ appear to offer independent advice on abortions but are actually run by organisations that oppose abortion, shame abortion care, or promote alternatives to abortion.

New research by the Center for Countering Digital Hate has found that 11% of Google search results for “abortion clinic near me” and “abortion pill” in US “Trigger Law” states lead to websites of anti-abortion fake clinics.

These “fake clinic” websites misleadingly appear to offer independent advice on abortions but are actually run by organizations that oppose abortion, shame abortion care, or promote alternatives to abortion. Some advertise so-called abortion “reversal” which is an unproven and potentially dangerous procedure.

The problem was particularly acute with Google Maps results presented to users, with 37% of such results presenting anti-choice providers as abortion clinics local to the user.

Researchers used Location Guard – a Google Chrome extension that allows users to change their geographic location – to conduct 26 Google searches for the terms “abortion clinic near me” and “abortion pill” in each of the 13 so-called “Trigger Law states”. These states have passed laws which effectively ban abortions if Roe v. Wade is overturned.

Researchers analyzed the first page of results for each search, recording 445 search results in total. Each first page consisted of a range of search results, including results that Google inserted from its Maps and News products. In total the sample of 445 results consisted of:

Fake clinics now outnumber real abortion clinics 3 to 1 with approximately 2,600 operating in the US, according to a study by the Alliance, a coalition of state advocates for women’s rights and gender equality.

Supporters of sexual and reproductive health rights have warned that “anti-abortion fake clinics” advertise themselves as places for impartial advice but in reality, have a record of disseminating misinformation on the health risks of abortion, including claims that termination is linked to breast cancer or infertility. In the pandemic, they were linked to false claims about pregnancy and even the Covid-19 vaccine’s impact on fertility.

The research found that in some cases where there was only one registered abortion clinic in the whole state, Google instead directed users to fake clinics in their vicinity. This was illustrated by the map results for Rapid City, South Dakota, which led to fake clinics nearby whilst the only registered abortion clinic in the state is located in Sioux Falls.

Nearly 28% of Google ads displayed at the top of search result pages were for anti-abortion fake clinics. One such ad from The Cline Centers claimed to offer free abortion consultations. However, upon further inspection of their website, it was revealed in a disclaimer that the clinic neither performs nor provides referrals for abortion procedures. This was corroborated by a Google review alleging that the “fake clinic” does not “provide medical care” and “exaggerate[s]” the risks of abortion.

While Google labels anti-choice ads with a disclaimer reading “Does not provide abortions”, some appeared as the first result for searches seeking abortion services. Reports have suggested that some users seeking abortions have overlooked these disclaimers and contacted fake clinics expecting them to be clinics that offer abortions.

Examples of narratives identified on fake clinic websites assessed include:

Say you're with us and demand that Google stop profiting from anti-abortion disinformation by helping lies displace evidence-driven healthcare. 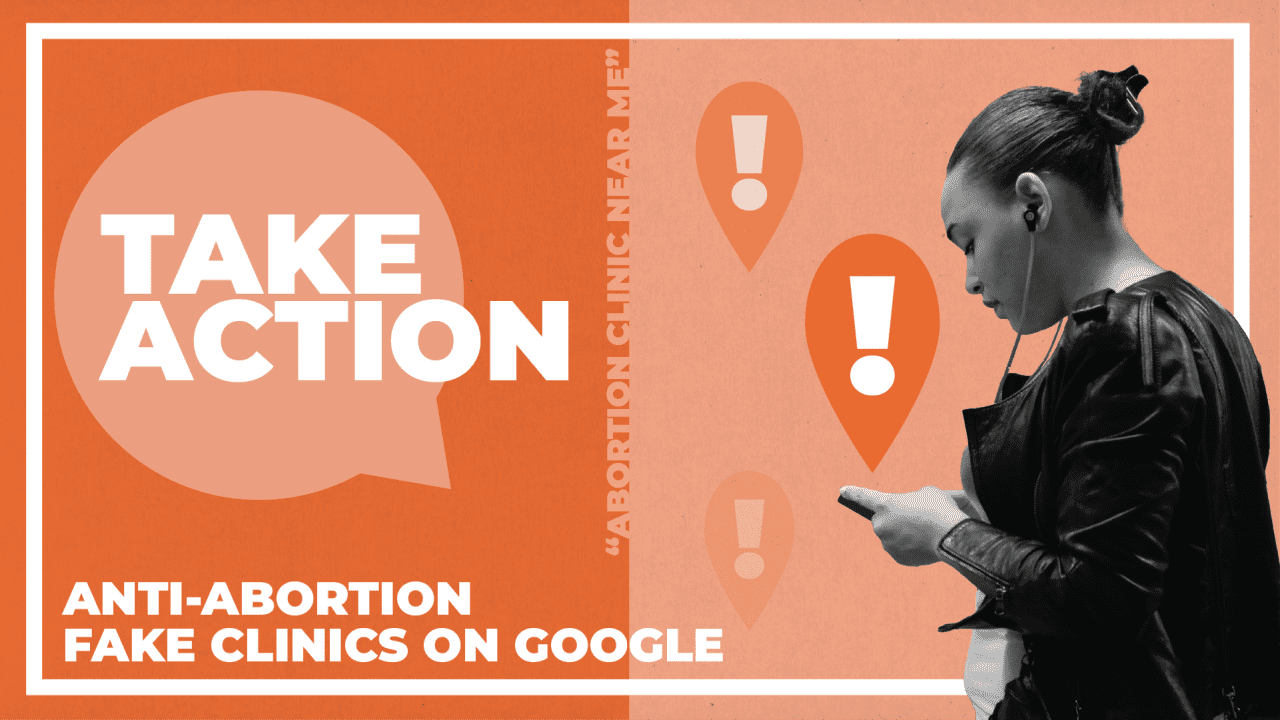